Mental health workers in Unison have called a protest against cuts in their service and their pay.

Greater Manchester West NHS Trust is proposing closing an adult mental health ward in both Bolton and Salford. They also want to move elderly care wards to Woodland in Little Hulton. Already these wards are over full. Government safe occupancy is 85%. In Bolton they run at 98% i.e. 13% over capacity before one of only 3 adult wards close. This will be a disaster for patients, their carers and friends.

“We will fight to stop all the proposed closures of mental health wards in Bolton, Salford and Trafford” said James Gold, branch secretary of Unison which represents staff in those areas.

The Con Dem government have cut NHS funding by 5% every year, whilst expecting Trusts to provide the same service. This is impossible. The English NHS is now dying, destroyed by a toxic mix of £20 billion cuts, galloping privatisation, and constant reorganisation.

NHS workers have had enough. We will not stand by while the NHS is destroyed. We do not choose this fight – but if Jeremy Hunt continues on this course, then health workers are prepared to defend our health service.

“Save Our NHS” demonstration in Manchester on Sunday 29 September

What an amazing day last Sunday the 29th was.  The largest protest Manchester has ever seen (with perhaps the exception of Peterloo)  Somewhere between 50,000 and 75,000 people marched to tell the conservatives that we will not stand by and watch the destruction of our NHS.

The road to privatisation

Please watch Raymond Tallis, who was Professor of Geriatric Medicine at the University of Salford for many years speaking in Salford about his new book ” NHS SOS”

He spells out exactly what is happening by stealth to our NHS and of the consequences which will follow. 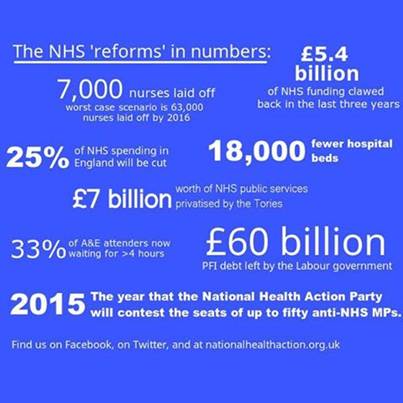 Jacky Davis and Raymond Tallis’ new book, ‘NHS SOS: How the NHS was betrayed and how can we save it’  is also available for you to purchase.

Ask your local library to stock and showcase these books, and bring in some materials to help display them!

Both books are available to you and your library at Special Launch Price!!!

Keep Our NHS Public Greater Manchester  strongly supports the original principles of the National Health Service (NHS). These are:

The passage of the coalition’s Health and Social Care Act demonstrated a shocking failure of the democratic process. The current health reforms and implementation of the Act are destroying the NHS in England. The coalition Government’s attack on the NHS also violates important social values. Always more than just a health service, the NHS is a social institution that reflects national solidarity; expresses the values of equity and universalism; and ensures the public duty to care for all in society. The NHS marked out a space in society where the dictates of commerce and the market were held in check and allow socially directed goals, for individuals and society as a whole.

Keep Our NHS Public Greater Manchester aims to bring together the many disparate campaigns already fighting for our NHS within the Manchester Area and also to provide help and assistance to the numerous and increasing numbers of people wishing to become involved.  . All three main political parties in England have lost credibility in their stewardship of the NHS and its values, and all have encouraged the increasing capture of parliament and the democratic process by powerful but narrow interest groups and financial interests.

In seeking to prevent further dismantling of the NHS and the erosion of its values and the public space, we will:

Please use the “Contact Us” tab in the menu at the top of the page to let us know about your new, campaigns, ideas, reports from CCG meetings or help with starting a campaign in your area.

One thought on “Manchester Home”

A Message from Micheal Moore